Tucson – No Longer a Desert When It Comes to Food Awards 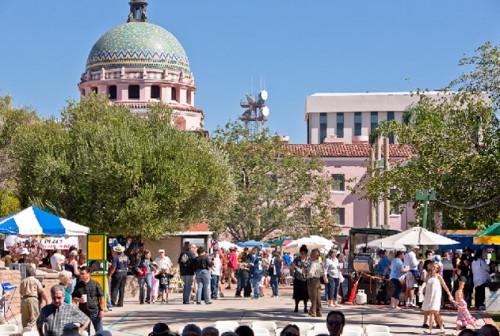 Think quickly – what U.S. city has earned the most prestigious international honor as a foodie town? The answer might surprise you. Move over, New York and Chicago – it’s Tucson, the town that the New York Times recently called “an unlikely food star.” There’s only one city in the United States that’s recognized by UNESCO (the U.N. Educational, Scientific, and Cultural Organization) as a Capital of Gastronomy for its unique, creative cultural heritage in local food – and yes, it’s Tucson. By the way, the UNESCO designation is basically the Pulitzer Prize of gastronomy.

Why Tucson?  Our culinary roots run deep – literally – with a 4,000-year-old farming history begun by the Hohokam and Tohono O’odham tribes. Apparently we are known for our water harvesting methods, sustainable agriculture, and our rich cultural food heritage.

The Old Pueblo is quickly becoming a major foodie destination. Lots of people may have overlooked us, but this is where we celebrate monsoon season on a covered porch with fresh prickly pear margaritas. Here, you can order dried, seasoned carne seca; a salad of pickled cholla buds and tepary beans; or about 1,000 versions of the best chili rellenos north of the border.

This year, Smithsonian Magazine praised our city’s culinary character “packed with restaurateurs, chefs, farmers and ranchers who nurture a vibrant food scene.” The Guardian highlighted the regeneration of our downtown “with a new wave of bars, restaurants and street food stalls escalating it into a foodie destination.” And Wine Enthusiast listed Tucson as Number 1 of the “Top Under-the-Radar Food Towns.”

I love going out to eat in Tucson, and I’ve definitely noticed a recent boom in restaurants featuring interesting menus with fresh, local ingredients.  Some favorites are Janos’s Downtown Kitchen and Cocktails, Café Poca Cosa, Charro Steak, and Barrio Bread, where they bake with local Sonoran white wheat. El Barraco, a Latin fusion eatery on 1st Avenue, is an impressive newcomer known for its seafood.

The other night a group of us from Andy Courtney Properties met up downtown, and we wandered down busy East Congress into Batch Café and Bar, with its whiskey bottle chandeliers, exposed brick walls, and high stainless steel community tables. Batch’s concept is simple: whiskey and donuts, with a menu of over ten versions of gourmet grilled cheese sandwiches and an extensive whiskey offering. On a platform balcony above the entrance a DJ cued up an upbeat dance set. The place was packed with college students as well as locals, and there was a patio with tables jutting out onto the street.  We soaked up the atmosphere – and a batch of donuts with Bourbon cream – and we all commented on the fun evening: It was a clear, starry Tucson night, and we were enjoying great food with good friends in our own unique culinary corner of the world.

This blog has been written and edited by Andy Courtney Properties Director of Operations Sherri Courtney and our longtime client and good friend Norma Roessler.